the story of the little wizard 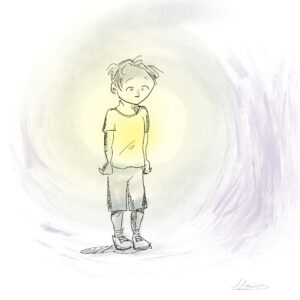 This little 7-year-old boy sat on my sofa.
When I asked him why he was there, he said, "I heard my mother and grandmother talking about what you did with them, and I decided I had to see you too, because when I visit my father, I am always crying, and I can't help it.

I started asking basic questions about how his stays at his father's house were going, but he stopped me immediately: "So when I'm there everything is fine, my father is really nice to me. But he doesn't believe in energy, and I know there's bad energy in his house, so I don't feel safe.

I didn't know what to do with "the energies" either... So we improvised: I asked him to create a ball of light in his hands. He immediately went into deep hypnosis. The features of his face started to change, full of calm and a kind of wisdom, he looked like a little Buddha.

- Put it under the my father's bed.

He does so, and then starts to move, with his eyes closed, as if he were catching things in the air.

- What are you doing?

- I collect the bad energy in a ball.

After a while he stops moving and says to me:

"What do you want to do with it?

He didn't answer, and started blowing on his fingers, as if he was blowing bubbles...

- They went from blue to red.

- Yes: they are still evolving, but they don't need me anymore.

(I get goosebumps just remembering that moment).

- Very well, thank you. But I need to do this in my mum's bathroom too."

He repeats the same strange protocol in his mother's room.

"Everything is done. I thank you for all this, it's very useful. I'm going to the to be used again later.

All right! Let's explore the future, when you're at your father's house, see if you're still crying?"

There's a silent moment and then:

"It's OK. I'm a bit stressed the The first day, but then I feel good.

Then he opened his eyes. He went back to being little He was a normal boy, and drew me a picture, waiting for his mother to come back.

His mother, who is a friend of mine, later confirmed that he no longer cried on the way to his father's house.

The sound of the waves House of the heart

House of the heart

Your hypnosis practice in Chambéry or by video.